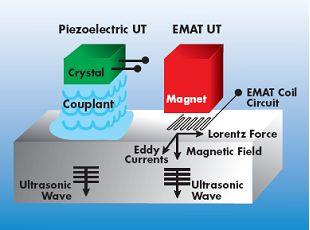 EMAT (Electromagnetic Acoustic Transducer) is principally a non-destructive ultrasonic testing device which has overcome many of the issues faced by conventional MUT piezo crystal probe.

THE EMAT PRINCIPAL – The EMAT transducer consists of a housing case with a socket, an induction coil, a protective cover, a magnetic flux concentrator and a permanent magnet. Alternating current feeds the induction coil, causing electromagnetic oscillations, which in turn induce eddy currents on the surface of the test object. The induced Eddy current interferes with the permanent magnetic field, creating ultrasonic waves directly on the surface of the test object. These waves propagate in the test object, reflecting and deflecting from the backwall and back to the EMAT coil enabling thickness measurement.

An EMAT is the only device that is able to transmit and receive transversal (shear) waves in this way (it is this phenomina that enables the EMAT probe to be applied without the use of a couplant gel). Waves transmitted by an EMAT allow much higher resolution and sensitivity than the longitudinal waves produced by piezo probes.

Integrity NDT are utilising the latest advancement in EMAT probe technology. The probes is built with a ‘pulsed’ electromagnet in place of the conventional ‘permanent magnet’. This innovative technical solution now frees the design from the need to have strong permanent magnet, this excludes the effect of strong magnetic adhesion to the test component, allowing for rapid inspection and also facilitates the option to scan the object as well as take ‘spot’ readings. A further advantage of this ‘pulsed’ magnetism, is that ferritic debris does not adhere to the probes.